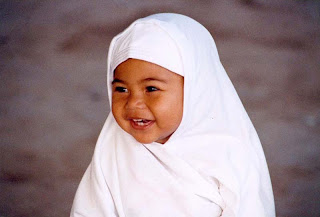 Islam allows female children to be married and engaged in sex prior to their first menses (prepubescent). In the Muslim faith a Muslim man can marry a child as young as 1 year old and have sexual intimacy with this child, consummating the marriage by 9. The dowry is given to the family in exchange for the woman (who becomes his slave) and for the purchase of the private parts of the woman, to use her as a toy. Even though a woman is abused she can not obtain a divorce.
To prove rape, the woman must have (4) male witnesses.
Often after a woman has been raped, she is returned to her family and the family must return the dowry. The family has the right to execute her (an honour killing) to restore the honour of the family. Husbands can beat their wives 'at will' and the man does not have to say why he has beaten her.
Posted by Chacelle Lindo at 12:40 PM

You are so sick! I can't believe you've written this and presented it as a fact.

If you have a twisted insight about something (anything!) just don't venture into it and keep to what you know best about.

Dont start your post with ''In Islam...'' because that isnt what happens in Islam? Who in the name of God, would marry a 1 year old? Stop trying to twist the religion so that it looks barbaric. Its not, if you simply didnt know, I sincerely apologise and beg your forgiveness but if you want to know the truth, women in Islam are only able to be married AFTER they have reached puberty. Most times, they choose to wait until 17 or 18 for engagement. :)

Strength Comes in Many Forms